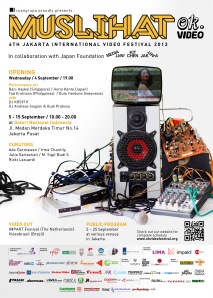 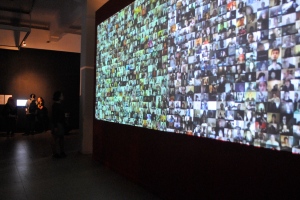 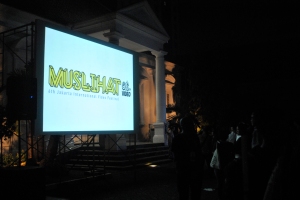 As the call to prayer beckons from a muffled recording, a young man solemnly places an object to his forehead. He runs it along the lengths of his arms and holds it to his heart, performing a healing ritual known as ruqyah . But the object in his hands is not the Koran. It’s a smartphone.

Now in its sixth edition since 2003, the international festival organized by Jakarta’s Ruangrupa art collective (known also by the tag RuRu) comprises artists from 29 countries and a range of spin-off events, including public workshops and discussions under the name Video Out and a collaborative project with the Japan Foundation dubbed Media/Art Kitchen, which will also tour Kuala Lumpur, Manila and Bangkok.

Curated by Irma Chantily, Julia Sarisetiati and Rizki Lazuardi, this year’s OK.Video festival is themed “Muslihat” (“Deception”), which serves as a starting point for multimedia works that question conventions of consumption and production.

Muslihat is commonly translated as deception, but can also imply strategy, trickery and finesse. The participating artists have responded with a show of shenanigans that aim to “outsmart technology” by using it for their own inventive purposes.

“The theme is relevant to the everyday lives of Indonesians,” festival director Mahardika Yudha said at the festival’s opening on Thursday last week.

“Consumers using technology as a means of production is a very important cultural phenomenon.”

Mahardika points, for example, to new forms of agency smartphones are bringing to individuals whose role was once cast as that of the limited “consumer.” People are now empowered as producers of photographs, videos, text, music and more. The original function of the device — that is, as a telephone — is forgotten among the seemingly endless possibilities for creation and distribution.

Curator Irma says such possibilities give all consumers the right of reply.

“It allows them to comment on institutions and conventions, to give criticism.”

As in Arya’s “e-ruqyah,” technology can even be appropriated for a previously unimagined purpose. This “sums up the exhibition,” Irma said.

Arya’s piece has been named one of the three best in the Open Submission category, selected from among 303 works sent from around the world. He shares the distinction with Polish media artist Marek Kucharski’s “Return” and Hong Kong artist Carla Chan Ho-Choi’s “Where a Circle Meets the Sky.”

Kucharski’s playful video shows the artist buying tiles from a hardware store, using them in an art installation, and finally returning the goods to the store. The receipt for the returned tiles is cheekily framed alongside the projection of the film.

Ho-Choi’s video begins by manipulating technology and ends after nature has taken over. The artist mounted a camera to a custom-made weather vane with a round mirror attached to one end. Set in America’s Mojave Desert, Ho-Choi let the wind take over as cameraman. The result is a dizzying view of red mountains and blue sky skimming in opposite directions, framed by the circular mirror.

The winning videos are on display at the National Gallery, alongside commissioned pieces from around the globe.

One sure to arouse attention is a video by German artist Christian Jankowski titled “Casting Jesus,” which is featured in the main hall.

The piece is premised as presenting a casting tape from an open audition held for Christianity’s next savior, a role that will be anointed in the style of a reality television show competition. “Act as if you’re blessing someone and exuding a force from within,” one contestant is told.

On opening night, von Sukmeister stood by his work, grinning as he watched viewers push forward for a peep inside the canvas. It seemed his work of muslihat was a success.